An initiative to create a long, east-west bikeway through Toronto is gathering momentum. TaketheTooker, intended

An initiative to create a long, east-west bikeway through Toronto 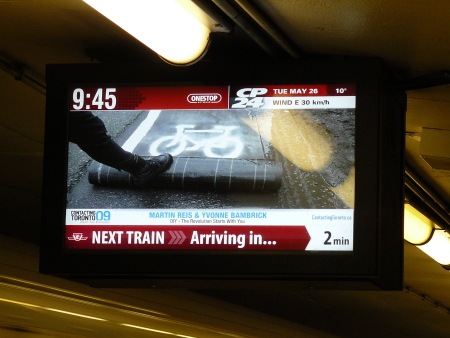 This photo shows a demonstration bike

The protest of cyclists on the 800+ books of Tooker’s collection from

Kyle Rae promised to put on bike lanes on Bloor in his last election campaign, and it was somewhat reinforced by a motion of Council to greatly upgrade the bike safety conditions on Bloor in Yorkville as part of that reconstruction.

But sadly, all we’re getting are sharrows.

While sharrows do have some real potential for improving our city’s biking, they’re so inferior when put beside what’s often done in Europe, and what could have been done here on Bloor in Yorkville.

The true tragedy is that there is room on the new road for bike lanes, just they’re being paved shut – in granite – with wasted space between the planters and the curb of .8M – which bike-friendly design would reclaim for bike lanes, as the road is just one lousy metre too narrow for good bike lanes of 1.5M and two travel lanes of 3M (Total is 15M, the new road is 14M).

Elsewhere in the City, this space between planter/curb is far less eg. Wellesley near Church, and in the Annex, and the entries to the subway at King and University are right at the curb.

So as Kyle Rae announces that he’s not going to run again – details are here http://www.thestar.com/news/gta/article/738176–rae-takes-aim-at-other-politicians?bn=1 – he shouldn’t be thinking he’s got a great legacy of providing for bikes, as his tenure started in 1991 – a bit before that Marshall Macklin Monaghan report that nodded to wide Bloor from Broadview over to Spadina as the #1 best spot in the old core for east-west bike lanes.

And the follow-up option and compromise of using Wellesley St. for an east-west bike lane is in itself badly compromised in design, and execution, where it became apparent after a year of vexing by Hamish and an FOI that the City has installed an irregular bike lane that has a true danger spot on the eastbound bike lane where it curves east of Jarvis St., and that this lack of safety is caused by the City not knowing what the true dimension of the road actually is (12.5M on paper, 12.0M in reality).

So like Mr. Miller’s legacy, the legacy of Kyle Rae can’t be seen as positive, but instead far more of a set of lost opportunities marred by the horrific death of an admittedly not poster-child cyclist that if the City had acted 18 years ago to provide bike safety with bike lanes parallel to the subway, we wouldn’t have had a pair of tragedies.

While the road-ripping has seemed paused for Christmas, with a spurt of tree-destroying despite the desire for more consumption of the season, it’s a shame that our leaders can’t pause this project to give cyclists and our climate a real nice Christmas present of extra space for bike lanes – some year – with pushing back that curb for the remnant two-thirds of the project. This includes Mr. Rae and Mr. Miller, who need to truly “green” their legacy.

Thanks to you and the other 2000 cyclists that showed up to the Bells on Bloor ride yesterday – what a hoot! That was certainly the largest bicycle advocacy event in the history of the city!

As you know, the Public Works and Infrastructure Cttee. will be discussing the Bloor Bike Study on Wed. June 3rd, 1:30 p.m., 2nd floor, City Hall on Queen.

Please send a quick email offering your full support for bike lanes on Bloor to pwic@toronto.ca

You can also request to speak to the committee by sending an email to pwic@toronto.ca , asking to speak to item # PW 25.20 You’ll be given 5 minutes to speak. Or just come out to watch.

Make your voice heard NOW on this very important issue.

This is the big event of the year. Come out to show your support for expanded cycling infrastructure and bike lanes on Bloor – Danforth!

The public is invited to attend the following open houses to discuss planned bike lanes on Bloor Street West, The West Mall, The Westway, and Rathburn Road. These bike lanes will expand the City of Toronto’s Bikeway Network by 11.5 km.

800+ books of Tooker’s collection from the 1960′s onwards are being made available to the public. Topics include transportation, health, cities, waste, food, nuclear, peace, nature, politics, fiction, kids, development, energy, globalization, advocacy and much more.

Special thanks to the Centre for Social Innovation for their donation of space, and to the Tooker Gomberg Greenspiration Fund.

The rebuild of Bloor St. in Yorkville is in the mainstream news today with some of the merchants of Bloor seeking a judicial review of the project in Divisional Court by lawyer Clayton Ruby. One major point of contention is the lack of an EA, the same point that has been raised with the ECO office by Takethetooker and Bells on Bloor in late July, and vexed about earlier by Hamish. There’s a compilation of the coverage on Spacing .

A lawsuit is being launched by Clayton Ruby ‘s firm to get the construction on Bloor halted for consultation and an EA, as the reconstruction is doing a lot of harm to some of the merchants.

This may be the ticket to ride to a bike-friendly, even Copenhagenized “Bluer” St.

If the City is forced to re-open it or have an EA,they may have to put in bike lanes.

Despite the weather, which was wet and cold, we had an incredible turnout of over 20 riders.  Spirits were high, and we had good turnouts from the East and West ends of the city.  We picked up cyclists in each of the wards we passed through along the way.

This is our answer to Mayor Miller’s statement that cyclists have to be more active in order to get bike lanes put in.  Coming right before the election, the message is clear: Toronto’s Cycling community wants bike lanes on Bloor Street now!

We’re riding again – this Saturday – leaving at 11:30 from either end of the subway to meet by the ROM on Ave. Rd. to ride down University Ave. to the anti-Afghan-war rally.

Pick-up points en route again with stops at Pharmacy, Greenwood, Chester@Grassroots and Sherbourne St. From the west: Durie St. south side, High Park at stoplights, Dufferin St. and the Spadina parkette too. Approximate times from east are 11:55, 12:15, 12:30, 12:40 and ROM at about 12:50. From the West: about noon@Durie, 12:15HP, 12:25Dufferin, 12:45Spadina, then ROM at 12:50. We’ll try to be wearing our bright orange Take The Tooker signs for easier identification.

Thanks for asking your candidates about bike issues!! It helps. The Toronto Coalition for Active Transport has also been chasing wannabes, so go to their site and see how candidates are doing on these issues of sustainable transport in your ward.

Thanks for riding (including on Bloor St.), safe journeys, lights help, and we’re having another ride on Nov. 4th and Nov. 11th, just to keep up the pressure.

These are photos from a passerby that originally alerted us to the 2nd lane.

“I was riding west along Bloor after having attended the Take the Tooker event on Friday.  As I passed Spadina I began to notice stencils of bicycles – what looked to be the makings of a real live bike lane on the North side of Bloor.  It didn’t take long to find and photograph the action.

Though not an ‘official line’, what struck me the most was how much better I felt as a cyclist once on the safe side of it.  Toronto needs more bike lanes – thanks to all the street fighters working to make them appear.”